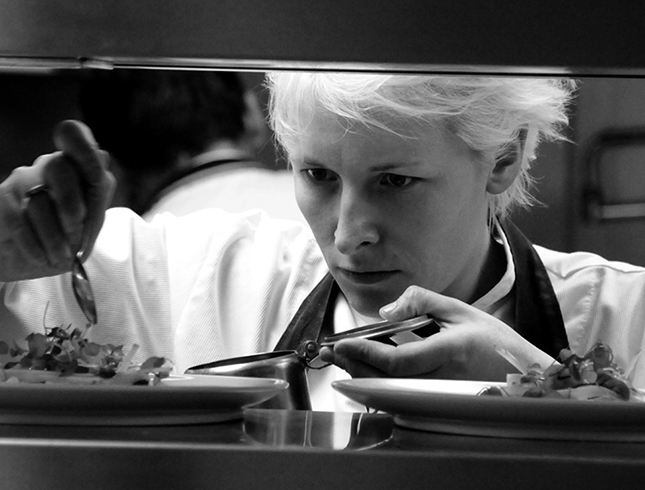 Hambleton has always been a haven for the creative. Artists, authors, musicians and free-thinkers have always flocked here throughout the centuries. So, it’s no surprise that we attract some of the country’s most creative culinary talent too. We’re proud to be considered a leader in the culinary movement and hold the longest retained Michelin Star in the UK – an accolade we proudly received in 1982 (and one that we’ll never take for granted) for our innovation, creative flair and passion for excellence. We’re purveyors of the finest British menu and our head chef Aaron Patterson has an exceptional treat in store for your taste buds this November.

They look forward to presenting a balance of Lisa’s signature creative Lancashire-influenced dishes with Aaron’s new winter dishes – all inspired by seasonal flavours and local produce. Lisa explains “I like food to be very visual, very elegant and packed with great flavours. It must taste of what you see. Food is very emotive and I love re-visiting some of the classics…It’s about taking that local produce and putting my twist on it – working with the seasons, to bring out the best of every product to create new exciting dishes.”

Peas in a pod

Michelin stars aren’t the only thing these two talented chefs have in common. The two share a passion for classic British food and sourcing local produce for every dish – which is what makes their menus so exciting because of their ability to twist a traditional dish, taking it from a much-loved favourite to a once in a lifetime experience. Another similarity is there’s long standing residencies. They both reside in the kitchens that inspired their professional careers, to create superior dining experiences – ones that continuously strive to raise the bar and make fine-dining more than dinner but a destination.

Aaron joined us at Hambleton in 1984 as a youthful talent who went on to work alongside Raymond Blanc and Anton Mosiman to name a few, before returning home to Hambleton as Head Chef in 1992. A position he has flaunted with finesse and a Michelin Star he’s maintained for over 24 years.

Before joining Northcote  in 2001, Lisa worked with Michelin Star Chef David Everitt-Matthias at Le Champignon, who inspired her career with his ambition, philosophy, discipline and creativity. Four key attributes she took with her to Northcote where she flourished under the guidance of the legendary Nigel Haworth…so much so he passed the reins to her in October 2017.

A meeting of minds as well as menus

As artists alone these two complement each other – their menu promises a discovery of taste and a marriage of flavours you’ll only ever experience once. Combine the consistency of Aaron’s exciting and ever-evolving menus (together with four AA rosettes, acclaim in The Good Food Guide and Harden’s) with simple yet superior dishes in classical combinations. Mix that with Lisa’s passion for elegance and emotion in every dish and you’re guaranteed excitement with every mouthful.

Like Hambleton Hall, Northcote has too maintained its Michelin Star for a considerable time and it’s certainly not going anywhere under Lisa’s watch. No stranger to pressure, Lisa appeared on the Great British Menu for two consecutive years – winning in 2010 and reaching the final in 2011, only to return to the show as a guest judge in 2016. Her mentoring talents were quickly noticed by MasterChef who invited her to act as chef mentor on MasterChef: The Professionals in 2015, a judge in 2017 and return again this year. To say we’re excited about her visit would be something of an understatement, we can only imagine the delicious delicacies she and Aaron are devising for your delight.

A Northcote night to remember at Hambleton

November is a season of comfort. Autumnal evenings – where wardrobe and cuisine both demand warmth and indulgence. This November night will be like no other. It’s where artistry meets philosophy, taste meets flavour and creativity fuses cuisine to ignite an unforgettable culinary collaboration. Tables are limited for an intimate evening of supreme luxury. Don’t miss your unique opportunity to taste something truly exquisite – reserve your place today

NEWS TO YOUR LETTER BOX, NOT YOUR INBOX

Sign up today to receive your copy of the Hambleton News.

Published three times a year, you can expect seasonal inspiration, news of events, kitchen wisdom and wine offers. Edited (and sometimes written) by owner Tim Hart, we’ll keep you up to date with special overnight stays and glad tidings from the Hall.